A little side project

A couple of years ago I was introduced to trap shooting by some guys at work and quickly fell down the rabbit hole.  I bought a nice used Remington 1100.  Nothing fancy, but a good gun from a good American manufacturer that made a blue million of them.  I’ve never cared to date the gun, but if I had to guess I would say late 70’s to 80’s.  The one thing that always bothered me about this gun was the finish on the solid walnut stock and forehand.  I’m not exactly sure if the factory was some sort of lacquer or more likely a type of conversion varnish, but it was incredibly too glossy for my tastes and terribly orange peeled as well.  I decided I was going to try and attempt to strip and refinish them with an oil finish closer to some of the older guns and high end replacement stocks.

I did not really feel like messing with caustic chemical strippers although I figured that they would work the fastest.  After a quick Google search, a product called Citristrip seemed it had a reasonable consensus.  I did not get any pictures of the stripping process, but essentially I just lathered the Citristrip on with a cheap paint brush and let it do its thing.  It did take a long time to soften the finish, nearly 8 hours.  I attribute this more to the thickness and hardness of the factory finish than the fact that the Citristrip is a “green” product.  After a little careful scraping and scrubbing, I had all the original finish removed.  I then cleaned everything thoroughly with mineral spirits taking special care to get into the checkering with an old tooth brush.  Then I let everything sit and dry out for a couple days.

The stock originally had a plastic butt plate that was a little deteriorated and I ended up breaking anyway when I tried to remove it….oops.  I laminated a couple scraps of tiger maple and rosewood, roughed the shape out and glued it to the stock.  Then it was just a matter of rasps, files, and sandpaper to get the profile to match.

Then I sanded everything to 400 grit and applied a couple coats of Tried and True varnish oil.  The result was just what I was hoping for.  I think I’ll apply 1 or 2 more coats of oil just to satisfy my OCD tendencies. 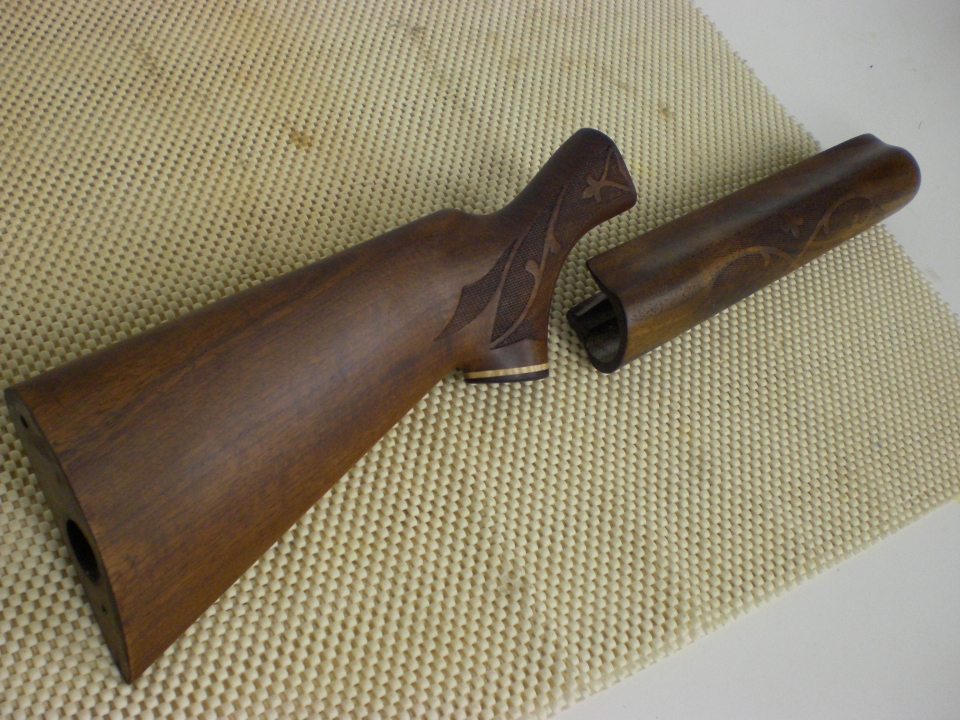 ← A Heroes Tribute
Can I buy a vowel? →
No comments yet